Elevate the Performance of your Executive Team with a Team Coach

Team coaches work with a team to elevate them to high performance.

They observe the dynamics of the team and deliberately charter a route to help improve team dynamics and create meaningful, incremental steps that improve performance.

In the sporting world, all teams that want to be at the top of their game have a coach to help fine tune and maximise their performance. They challenge, push and build the confidence of the team, helping them focus on their team purpose and goals.

In the same way, critical teams in your organisation should also have coaches to fine tune their performance so the business can benefit from the full potential of the team. Team coaches are especially valuable during times of great change and challenge.

Team coaches play a valuable role in the health of an organisation. By working closely with the team leader and members of the team, they are able to challenge the team to observe their dynamics, consider their approach and help them best realise together what their desired outcomes are.

The overall purpose of a team coach is to guide the team to improve performance in a way that is sustainable and empowers the team to continue their improvement even after their coaching process has finished.

The Attributes of a Successful Team Coach

They listen and ask great questions

Team coaches are not there to impose their vision on the team – they are there to prompt thought and discussion amongst the team as to how they can improve their performance.

The role of the team coach is to create a space where team members can discuss and debate, hold conflicting views, and create an environment where different points of view are both appreciated. By asking probing and challenging questions, the team coach forces the team to consider themselves from new perspectives – both on an individual level and as a whole.

Critical teams in the business are likely already made up of high performing individuals. They have been carefully selected to fulfil that role and have the potential to excel on a personal level within their role.

However, if they do not shift their focus from their individual performance to overall team performance, they are missing out on why they have been brought into the team in the first place. They may as well be individuals spread across the company working on their own in silos.

By helping shift their mindset from “me” to “we”, team coaches enable team members to have a laser-like focus on the reason behind the team and help them achieve more meaningful results that will deliver the greatest impact to the organisation. The team is able to reach their full potential and consistently produce results that are greater than just the sum of the individuals.

They understand the group process

Coaching individuals and coaching teams is similar in many ways, but there are also many key differences. To be a successful team coach, you need to effectively manage group dynamics that are incredibly varied and constantly changing – coaching multiple perspectives and personalities at once.

As part of this role, you may need to respectively close certain individuals down who may be dominating the conversation and invite others in. It is important to keep it a group process, rather than simply coaching individuals 10 minutes at a time with an audience.

They hold the team accountable for taking action

The role of the team coach in making sure they deliver meaningful outcomes is two-fold.

Firstly, a skilled team coach needs to draw out actions from discussions. Often during team coaching sessions, many themes emerge that the team would like to improve and action upon. As well as conducting the flow of conversation, team coaches need to identify and extract these emerging themes and present them to the team to see which factors are a priority and what steps they will take to achieve their goals. 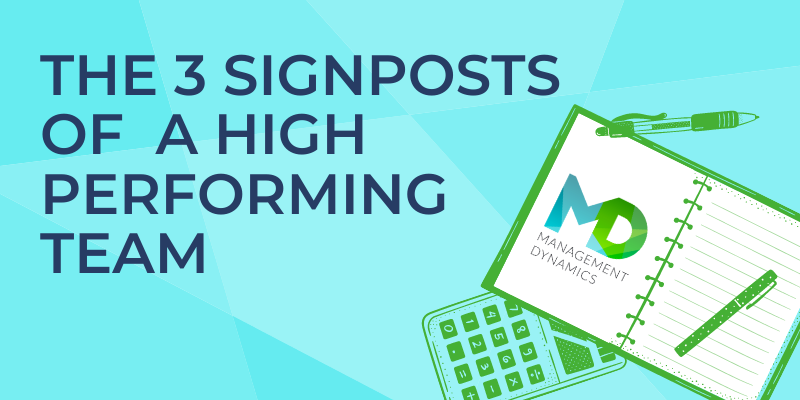 The Three Signposts of a High Performing Team

At Management Dynamics, we frequently use a moderator to assist the team coach in recording and identifying these themes, ensuring no important topics that are discussed are missed.

The best team coaches use leading edge Diagnostic tools, like the Advantycs Diagnostic tool, which measures team the Dynamics of a High Performing Team. It is a unique tool powered by data from executive teams in Fortune500 companies. It serves to quantify team performance and indicate where development would see the highest return on investment.

The insights from the Advantycs diagnostic tool, the experience of the team coach and the desired outcomes of the team leader are pulled together to design a facilitated process that will take them from where they are now to where they want to be.

Why Engage a Team Coach (instead of just doing some team building?)

Team building days are an effective tool to help build rapport and relationships throughout the organisation. It allows teams to disconnect from the day-to-day and think more holistically about their team and organisation. However, as fun as they can be, the impact can be minimal and improvement is often not sustained over time.

Team coaching is an altogether different approach to development. It is much more deliberate, creates greater impact and is sustained well beyond just the coaching sessions.

Rather than having a “stab in the dark” as to what the team needs to help improve performance, a team coach gets to know the team and the organisation, analyses and identifies priorities with the team, and coaches the team accordingly. The impact extends well beyond the coaching process. This bespoke approach to team development ensures the impact is sustainable and enduring.

Get in touch with friendly experts

Whether you are looking for some expert perspective into your organisation, want to elevate your team performance but don’t know where to start, or want to know what we had for breakfast – get in touch, we would love to hear from you.

This website uses cookies to improve your experience while you navigate through the website. Out of these, the cookies that are categorized as necessary are stored on your browser as they are essential for the working of basic functionalities of the website. We also use third-party cookies that help us analyze and understand how you use this website. These cookies will be stored in your browser only with your consent. You also have the option to opt-out of these cookies. But opting out of some of these cookies may affect your browsing experience.
Necessary Always Enabled
Necessary cookies are absolutely essential for the website to function properly. These cookies ensure basic functionalities and security features of the website, anonymously.
Functional
Functional cookies help to perform certain functionalities like sharing the content of the website on social media platforms, collect feedbacks, and other third-party features.
Performance
Performance cookies are used to understand and analyze the key performance indexes of the website which helps in delivering a better user experience for the visitors.
Analytics
Analytical cookies are used to understand how visitors interact with the website. These cookies help provide information on metrics the number of visitors, bounce rate, traffic source, etc.
Advertisement
Advertisement cookies are used to provide visitors with relevant ads and marketing campaigns. These cookies track visitors across websites and collect information to provide customized ads.
Others
Other uncategorized cookies are those that are being analyzed and have not been classified into a category as yet.
SAVE & ACCEPT